A Summary Report of the ‘Occupy Innovation’ Roundtable at Rutgers University

Last week Protest Camps hosted a roundtable looking at issues of innovation and creativity in place-based social movement activism. We asked doctoral student and teacher Sean T. Leavey from the Journalism and Media Studies Department, at Rutgers University to offer an overview of the event. 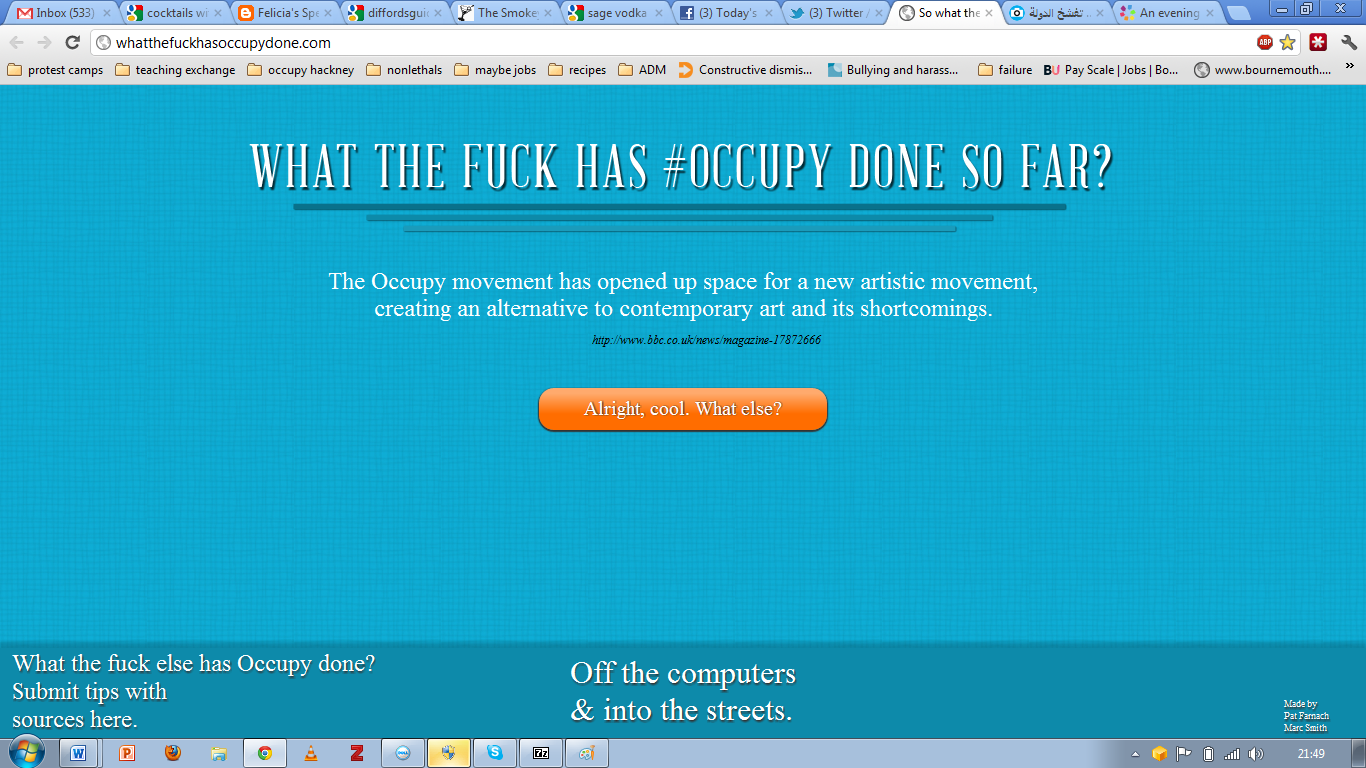 Since the emergence of the Occupy movement, the ongoing dialogue on the tactic of occupying places and spaces has taken many forms. On February 21 2013 the theme of occupation was re-explored at the Occupy Innovation roundtable event at Rutgers University. Organized and moderated by Dr. Anna Feigenbaum, this event brought together a panel of activists, each innovative in their own work, around the topic of open source tactics and technologies in terms of place-based and space-based protest. Dr. Feigenbaum arranged the roundtable in light of current economic and security conditions, under which the options for creative, waged work are highly limited. Public protest, particularly the use of direct action tactics, is being statutorily curtailed, and even criminalized. The roundtable provided a forum for panel members, and those in the audience to discuss how to thoughtfully and creatively develop strategies for continual resistant practice against, and under, the ever expanding and simultaneously constraining net of neoliberal capitalism.

Among the panelists there was a wide range of insight and expertise, as the roundtable was composed of architect Greta Hansen of 123 Occupy; artist Josh MacPhee of Occuprint, Just Seeds, and the Interference Archive; scholar and activist Dr. Patrick McCurdy of the University of Ottawa; Dr. Alessandra Renzi of the Sandbox Project and the University of Wisconsin; and Rutger’s own Dr. Todd Wolfson, co-founder of the Media Mobilizing Project (MMP), and professor of media studies in the University’s School of Communication and Information. Kicking off the conversation on innovation, architect Greta Hansen’s explained her work on the analysis of space in Zuccotti Park, and in turn, understanding the use of that space. Hansen’s activism has included collaborating with a working group in mapping the park, and developing what could be termed technologies of occupation, specifically regarding shelters for living and medical emergencies, in the form of “anti-brand,” inexpensive, do-it-yourself tents and platforms, made of ubiquitously found materials, and inspired by the simple declaration of: be temporary. 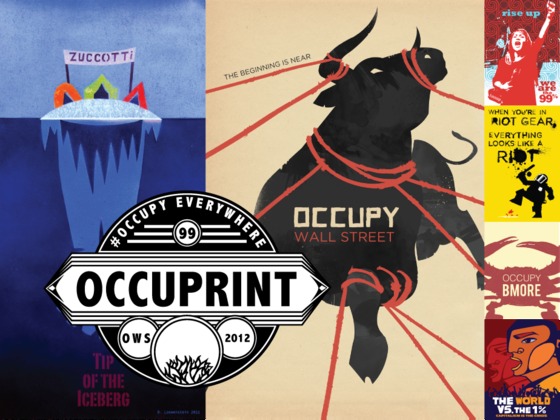 Following Greta Hansen, Dr. Patrick McCurdy extended on the necessity for innovation in meeting the challenges of occupying spaces and places in protest, showing where simple, ordinary technologies can be implemented alongside higher technology devices. For instance, the Occupy Wall Street media outreach operation found a need to be creative in protecting electronic devices from the elements, after camp life was interrupted due to the prohibition of tents by city authorities. Activists utilized tarps and dumpsters to shelter computers and cameras, also making use of umbrellas, by physically holding them over the electronics, in order to shelter the equipment from falling rain. In terms of communicating, the people’s microphone helped avoid any snafus over restrictions on amplification in Occupy sites across the United States, and in Tahrir Square, protesters rewired lampposts for power, and used them to communicate across the occupied space, signaling to one another about police movements, by banging against the posts in a form of code.

Next was Dr. Todd Wolfson, whose work with MMP follows in the tradition of Martin Luther King’s Poor People’s Campaign, and is inspired by the grassroots media activism of the Zapatistas. The efforts of MMP are aimed at organizing with poor and working people for improving labor conditions, and the quality of everyday life in Philadelphia. Early on, MMP coordinated with taxi drivers in the formation of Labor Justice Radio, and has campaigned with parents and members of local communities across Pennsylvania to save Head Start programs from peril. Like the previous speakers, Dr. Wolfson noted that though technological innovations are helpful, such things in themselves are not a value. It is in the use of innovations in creating connections across organizations and common struggles, which is where value lies. In terms of MMP, technological innovation is used to enhance traditional organizing strategies, which have proved invaluable to social movements. Without them, new platforms of communication would be limited in their utility.

Dr. Alessandra Renzi’s comments followed on from Dr. Wolfson’s, aimed at expressing a reminder that notions of innovation and openness are also articulated through the logic of neoliberalism, posing the question: if innovation, openness, and flexibility are what the neoliberal order is demanding, what does it mean to occupy innovation? Dr. Renzi’s answer was a liberating and optimistic one, noting that those in struggle against the capture of daily life by neoliberal capitalism are already being innovative, embodying and employing open, creative practice and technology, in which talking about the occupation of innovation is redundant. Like Dr. Wolfson, Dr. Renzi’s ethnographic, scholarly, and activist work involves using media technologies to bring people together. Dr. Renzi collaborates with artists and other media activists in the development of programming involving participatory audiences, appropriating a part of the media dispositif, for the purpose of creating information and community.

The last to deliver remarks, was artist and activist Josh MacPhee, pointing out that meaningful change comes out of people in motion, which is different than what we think or picture, as movements emulate each other, in the adoption, or under the influence of, fluidly circulating actions and practices. MacPhee demonstrated this in recalling a story about how activists from Tahrir Square had pizzas delivered those participating in the 2011 Wisconsin protests. Months later, those in solidarity with those in Zuccotti Park did the same, overlooking that the Occupy Wall Street site already had a robust kitchen and food distribution operation. The pizzas really were not needed, and the question became: what to do with the boxes? People made signs to share, which people could, and did, pick up and display, “sharing newsfeeds in an embodied way” by holding up signs others made. In this, MacPhee noted that, like the other panelists, forms of innovation are not necessarily found in higher technology affordances. Sometimes we have to look to what has been used in the past, rather than what is new to us. 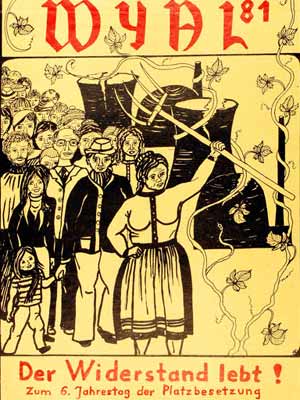 Following the initial remarks of participants, a conversation ensued in response to a question posed by Dr. Feigenbaum regarding the composition of the Occupy movement, specifically in terms of philosophical tensions over whether activists should personally engage in wage labor, and if it is ethical, or not, for activist work to be performed for monetary compensation. Immediately disabling the rationales for the former problem, Greta Hansen noted that along with their particular skill sets, wage workers from many fields, vocations, and professions can use the material resources at their disposal, scavenging and appropriating whatever is available for activist work. Also, that at Occupy convergence spaces, all types of expertise was seen as important, such as the skills of homeless people in winterizing temporary shelters. Dr. Wolfson concurred, stating that such matters are a contentious issue, and that the valorization of all kinds of labor is important.

In this attempt to reimagine the world, Josh MacPhee declared that it is necessary to break the myth of frictionless capitalism, and it may be valuable to strive for being tactfully open, looking to create a surplus of relationships, to counter the capture of social surpluses by capitalism, as is done with Zipcar, corporate bike-share initiatives, and Kickstarter. Dr. Renzi noted though, that capitalism as a social system captures our desires, affects, practices, and sociability, which complicates understandings of cooptation, as we have to look to ourselves in how we are all implicated in willingly operating in the process of supportive production, since it is we who may use Zipcar and corporate-sponsored bike-sharing businesses, or give money to someone doing something creative through Kickstarter. Referencing his forthcoming co-authored book Protest Camps: Experiments in Alternative Worlds with Anna Feigenbaum and Fabian Frenzel, Dr. McCurdy turned a critical eye to media studies.  He argued that one must creatively decenter media, and look to infrastructure, to counter the tendency in the field to treat ICTs and online platforms as isolated from broader technologies, structures and practices of protest media ecologies. Overall, the major take away from this event, as articulated by the panel, it is that innovation must not be based on the logic of profit, but instead built into protest as a form of antagonism able to work under and crack through the flexible power of neoliberal capitalism, to which there is no outside.

Sean T. Leavey is a second-year PhD student and instructor, in the Journalism and Media Studies Department, at Rutgers University’s School of Communication and Information, in New Brunswick, New Jersey. Sean’s teaching and research interests include social movements and activism, popular culture, and media subjectivity. He is currently on a research team, working on a project investigating New Jersey’s digital divide, and is teaching a course titled Gender, Race, and Class in the Media.