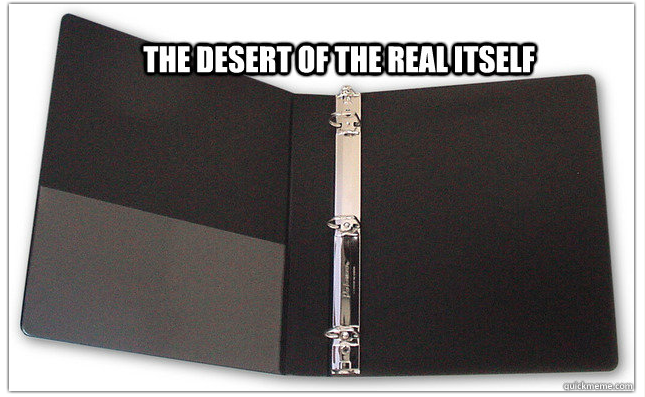 In 1981, Baudrillard wrote that “Disneyland is presented as imaginary in order to make us believe that the rest is real.” Last week in my History of Consumer Society and Mass Media class we read Baudrillard’s now famous text Simulacra and Simulations. We focused in on key arguments through a game of ‘’Dense Postmodern Theory Pictionary” that asked students to try and sketch out central arguments in the text. Among the excerpts we looked at was Baudrillard’s discussion of Disneyland and ‘third order simulation,’ as well as this passage on what would happen if you tried to perform a fake hold-up:

“Go and organize a fake hold up. Be sure to check that your weapons are harmless, and take the most trustworthy hostage, so that no life is in danger (otherwise you risk committing an offence). Demand ransom, and arrange it so that the operation creates the greatest commotion possible. In brief, stay close to the “truth”, so as to test the reaction of the apparatus to a perfect simulation. But you won’t succeed: the web of art)ficial signs will be inextricably mixed up with real elements (a police officer will really shoot on sight; a bank customer will faint and die of a heart attack; they will really turn the phoney ransom over to you).”

We also talked about Baudrillard’s idea that Watergate “did not exist.” For Baudrillard, political scandal is a performance, a distraction, a simulation.

Today the notion of US presidential debates as infotainment seems like old news. This generation of university students are so accustomed to shiny screens and politicians’ rehearsed sound bytes, that if a debate unfolded without bold blue and red backgrounds, and wasn’t embedded in hours of repetitive, dramatized ‘news’ commentary, things would seem very strange.

As debate number 2 aired live on American television, the performance seemed fairly similar to the years gone before, albeit with more tweeting and the highly touted ‘first female host in 20 years’. But then something new happened. Veronica De Souza, a social media manager recently made redundant, put her increased cognitive surplus into internet creativity, as many do, starting the tumblr bindersfullofwomen.tumblr.com.  This did not happen when the debate ended, but rather instants after Romney uttered those words, that will stick to him now through the rest of the campaign like toilet paper super glued to his shoe.

Hours after the tumblr went live, amazon ads followed suit. Within 24hrs of the debate hundreds of reviews of Avery Binders had been logged, along with thousands of comments, likes, and review ratings, as well as mass re-circulation through other social media, even making it onto prime time news.

This was simulacra, simulations gold. It was the kind of timing media and politics lecturers dream of.

So I wanted to know: What would Baudrillard say? And I knew exactly who to ask.

In the sprit of social media, it was time to crowd source the classroom. We began by breaking the issue apart. First, what would Baudrillard say of the US presidential elections generally? Of voting? Of US Democracy? From there we could get closer to the question of how he might make these memes. 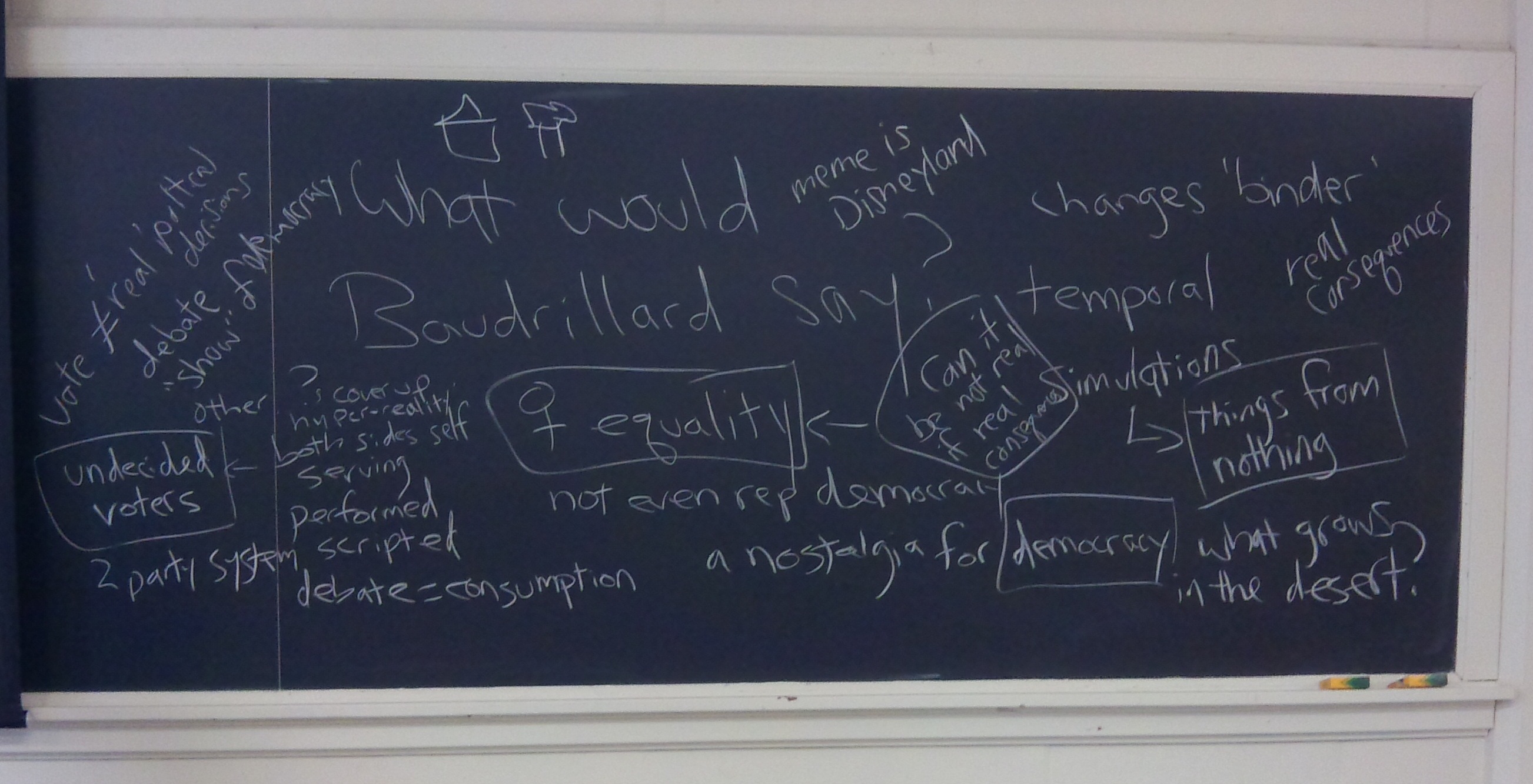 Well I guided the class through Baudrillard on elections, I left it to them to tell me what to make of the debate and its emergent memes. I hadn’t thought it through yet, waiting for the moment to make sense things together that the classroom can offer up.

According to Rutgers University Course 512:391:04, this is what Baudrillard might say:

The debate is a fake hold up. These two men dressed in suits, powdered in make-up, speak in well-rehearsed slogans made up of political sounding words. Yet while the debate may be fake, its outcome has real effects. We are the hostages in this election hold up.

And these binders, they are our new Disneyland. A bit of play, some fantasy that keeps us smiling and giggling. An amusement so hyper-real it makes the debate seem real. But we are meme-ing away in the desert .

plaque from entrance to Disneyland