“We have given the women a reasonable amount of time to make their protest, but they are trespassing and they must go.”
-Cyril Woodard, Chairman of the Recreation and Amenities Committee
Newbury Weekly News, Greenham, 21 Jan 1982

“Now is the time for the protesters, having made their point, to move on.”
-Mayor Boris Johnson, BBC News, Occupy LSX, 26 Oct 2011

‘Time to Move On’ the headlines echo across thirty years. There is something eerily similar between this past call on protesters to pack up and the present justifications for an eviction of the OccupyLSX camp outside St. Paul’s Cathedral. Official press releases from St. Paul’s have been vague, citing safety concerns and insisting the Cathedral’s interests are not commercial . Yet this week canon chancellor Dr. Giles Fraser resigned over worries there may be “violence in the name of the church” and St Paul’s called on protesters to leave the site peacefully. Meetings amongst officials are currently taking place to plan legal action around removing the camp.

While the issues and parties at play here differ from past UK protest camps, the basic arguments remain the same. Occupy campers and their growing support network claim a right to peacefully protest. Those with commercial and political interests jeopardised by the continuing presence of the camp appeal to reasonableness and paternalistic concerns for safety in efforts to remove campers. Paving the way for an eviction, authorities rally public support by continually referring to protesters as dirty, clueless nuisances who should ‘get a real job’. An irony not lost on a camp that is, in part,

Back in the early 1980s at Greenham Common, protest campers became so used to this kind of name-calling, they would turn such insults into ditties with titles like ‘Brazen Hussies’ and the ‘Layabout Song.’ Although protesters are often painted with a brush of buffoonery, in reality the majority of campers and their supporters are very aware of how media representations operate and have a technological literacy that at times exceeds that of the journalists’ covering their encampment. As russell_collins joked on twitter earlier this week, “ @telegraph : If you’re having problems with your cameras on site, our tech team might be able to help!”

Protesters’ ability to wittingly withstand slanderous attacks, alongside the collective knowledge of many seasoned campaigners and legal advisers, comes in handy when battles move from media frames to legal claims around protesters’ right to camp. Just as protest campers in the UK have historically shown an incredible resilience to name-calling, they’ve also displayed the ability to bounce back–bigger and stronger–from evictions. 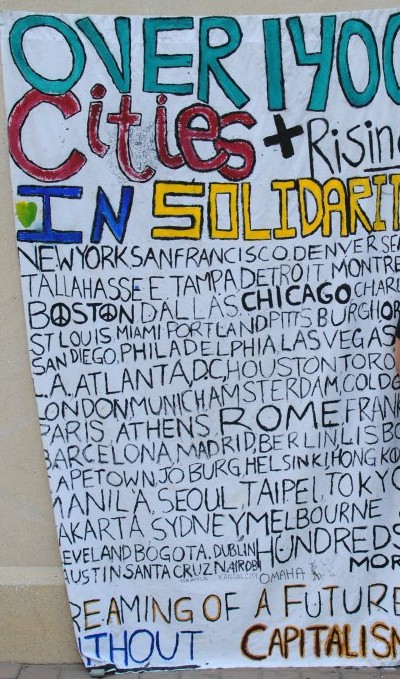